Home » Horoscope » Leaving A Scorpio Man Alone: 2 BEST Ways If He Ignores You

He is definitely not a nice guy when trying to break off with you.

Are you suffering from the relationship with Scorpio man?

There’s one thing I should tell you about this guy: he can become a real jerk when he is done with you. Don’t be surprised if he treats you with an abrupt manner or says something rude to you.

No matter how serious you talk to him, he probably cuts off the conversation, suddenly yells or acts unruly without logic.

How to handle this guy?

Maybe you should consider leaving a Scorpio man alone in case he ignores you.

When his emotions take over, it’s difficult for him to handle things in a logical or reasonable way. If your Scorpio man senses that you’ve done anything terrible to him, he will be snippy and crappy.

So it’s better not to hurt him or you cannot live with him for a long term.

When a Scorpio Man Ignores You… 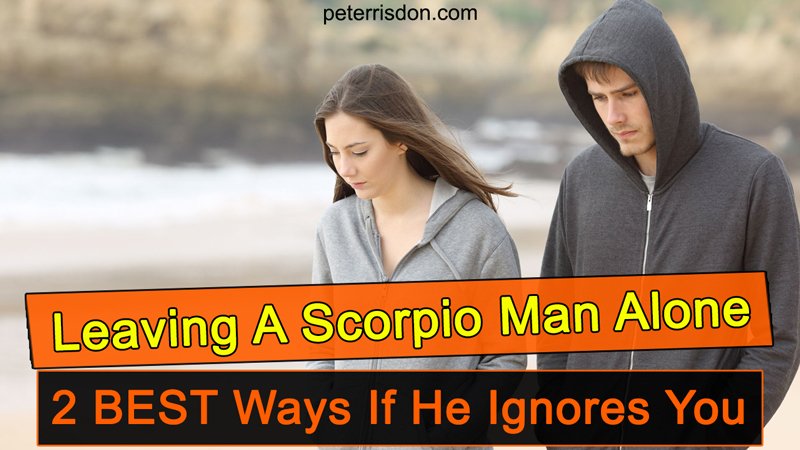 Does Scorpio man stops communicating all of sudden?

Due to Scorpio personality traits, he is introspective and independent. In case he withdraws from you, it’s because he needs his own space to deal with his problems, stress, or workload.

Sometimes he’s also distant from you if he feels irritated with the current relationship. That’s when you’ll find him disappear for awhile (a few hours or even a few days) to clear his mind.

It may be not fair with you, but there’s no way to win your Scorpio partner back but to get to know and accept this trait of his. Well, this guy in love is complicated so it takes you much time to completely understand him.

If you’re unsure whether or not the Scorpio male is ignoring you, here are a few signs:

When a Scorpio man feels the need to be alone, don’t interrupt him. Ignoring you doesn’t mean he’s no longer in love with you; thus, you shouldn’t take all of his withdrawals personally.

You should give him his alone time so that he can actually feel how important your presence to him.

If your Scorpio man is ignoring you, please do not ignore him back. Instead, you better remain patient because this guy will certainly return once he makes clear everything in his mind.

Scorpio man normally is attentive and responsive; however, he may become distant at times. Saying nothing, he just disappears and ignores all of your calls and messages – this often makes his partner worried.

Indeed, it’s normal for this guy to withdraw himself from his loved one.

As mentioned earlier, his disappearing acts will only be brought on the surface whenever he has to deal with his own matters, such as unhappiness, dissatisfaction, or stress.

Rather than asking an explanation from him, you’re advised to provide him space and time. Be patient and understanding Scorpio man behavior from his point of view. If you are in a relationship with this guy and he acts cold toward you, don’t claim that he does not love you.

He can be in love with you but still ignore you.

Being frustrating is simply one of prominent traits of his zodiac sign.

What to Do When Scorpio Man Ignores You?

You realize your Scorpio man has remained silent and distant with you for awhile, it is probably a sign you’ve done something which possibly upsets him.

If you notice that he is quiet, sulky, or angry, simply give him space.

Nevertheless, make sure the alone time you give to him doesn’t last too long or you may lose the connection between you and him; and as the result, both may break up in the end.

As I told you above, you should not ignore him in return, or it will turn into a competition of who is the best at ignoring each other. You will also never win against the stubborn Scorpio! Therefore, just be patient and send him messages occasionally to see how he is – don’t bombard him as well.

For example, if he comes back and acts like nothing happened and this upsets you, then talk to him directly. Have a serious conversation and express your true feelings, I recommend you to make a compromise with him to stop this issue occurring again.

When your Scorpio man displays his disappearing acts, it may be due to many factors – there’s a possibility you upset him, but he can get stressed because of other external things.

Unfortunately, this guy tends to throw his anger onto the people he loves most.

The reason is because he expects those to understand for his behavior. In the relationship with you, he knows you love him so there’s no chance he will lose you.

Did I tell you this guy can be selfish?

In case you are not the primary reason for his disappearing acts, the best thing to do is to still give him his own space. Never force him to explain everything, or he’s likely to explode. Leave your Scorpio man alone and allow him to deal with his issue himself.

The Scorpio male seems to lash out when he turns on his anger; that’s why he chooses to ignore you rather than to start a conflict.

He doesn’t want to make the situation much worse; thus, he disappears.

Due to this, it’s necessary to give him space. If you don’t, then he can be mean and blow up. If you’ve hurt him in the past, Scorpio man can forgive but will never forget; and might throw it back at you in this case.

So, leaving a Scorpio man alone is actually a good idea when he is ignoring from you or gets irritated over certain things.

Don’t try to make a Scorpio miss you as he’ll definitely come back once making up his mind.

In the end, isn’t a relationship about compromise, is it?

If you want a long-term relationship with the Scorpio male, then you should build it based on compromise and understanding from the beginning. There is a saying, “Distance makes the heart grow fonder,” and this applies exactly to this confusing guy.

For any question about Scorpio man and solutions on how to deal with a distant Scorpio man, leave your comment below.